In 2018, Duchenne UK's patron Clare Runacres, a radio journalist and newsreader rode the Duchenne Dash. Clare has volunteered on the Dash for a number of years -- but decided to ride it in 2018!

Clare wrote a blog on her experience. Below is her final blog, and you can read all of her blog here: https://duchennedashdiary.blogspot.com/

I actually did it. I cycled all the way to Paris in 24-hours. I didn’t get swept up in the van (anyone too slow has to go in a car with the support crew for a stage), I didn’t fall off, I didn’t crumble into exhaustion and tears, and I even managed to overtake a number of men on the uphills (very proud of that!). I cannot express the relief that it’s over, and the pride at having done something tangible to help Eli, Emily and the other DMD families. So far I’ve personally raised more than £4,500 for Duchenne UK – and between us the Dashers are on £887,000 - a fantastic achievement and one that will make a real difference. Hopefully after the Dash Max and the Cheshire Dash, we’ll have made a million.

How was it? Some of it was much better than I’d anticipated, some of it was as bad as I’d thought it would be. I had the advantage/disadvantage of having driven the course a number of times so nothing was too great a surprise – but idling up a hill in a car in the lowest gear behind forty huffing and puffing, tired cyclists is quite different to being one of those cyclists!

The first day – and indeed the first leg of the first day – is the most hardcore. It was 75k long, the longest section of the ride and had most of the biggest hills, through the South Downs. There was meant to be a very short loo break outside London but somehow we cycled right past it. Alright for the men who could use the “facilities” in the form of roadside hedges. Not so easy for the ladies. Also, cycling gear and the layers and layers of Lycra with zips and oddly placed pockets do not make for easy disrobing. As you arrive at a rest stop – the formidable ride director Emily Waring begins the countdown to you leaving – on more than one occasion I found myself in the loo with less than two minutes to go trying desperately to peel off the layers of sweaty Lycra knowing that there would be no impromptu hedge stops for me along the way. I was very concerned about having a Paula Radcliffe moment on the ride but happily avoided it. Apparently the answer is to not use gels which can have an explosive impact on your insides!

Without doubt the best bit of the Dash is the camaraderie. Coming into Newhaven on the first day my legs just started losing their oomph and I began drifting further and further back down the peloton. And a feeling of hopelessness set in. This guy I’d never met before, Patch, drew up alongside me and began chatting about why we were both there, about cycling, life in general etc. And before I knew it, we were in Newhaven. I may have been cycling, but he totally got me there. You see it the whole time on the Dash, strangers – united only by the cause – helping each other out. Literally putting their hands on people’s backs and pushing them up hills. There were two lovely ladies riding at about the same pace as RP and I – Laura and Anna – with whom we chatted and joked quite a lot. They were an absolute pleasure to hang out with and made the miles fly. For me, the best of it all was hanging out with RP, who I love but never get to see enough of as we both lead very busy lives. In 24 hours you can catch up on a lot of chat. It was such a pleasure. She’s just that little bit fitter than me too, so when the darkness descended, she’d up the chat a bit and get me over the next hill (literally). 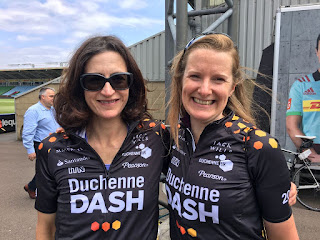 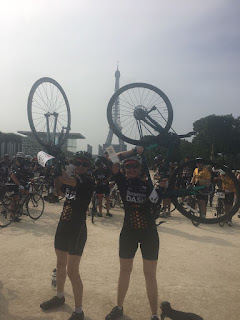 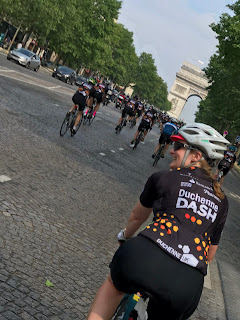 In terms of damage, my legs are black and blue – I stopped counting on one leg when I got to a dozen bruises. I ache from hip to toe three days on. I’m limping slightly - my right knee is properly sore. My right shoulder is quite painful. The heels of my hand are numb. And I can confirm that there was a certain amount of chafing, which stopped pretty much as soon as I got of the bike for the final time (a heavenly moment). But I’m properly proud of what I’ve achieved.  The day after the Dash I went to Eli’s grandmother’s birthday party. He sang – so beautifully - a solo of his favourite song, Wonderwall. It contains the words “Maybe, you’re gonna be the one to save me”.  And I thought that maybe each and every person who takes part in the Dash could be the one to save him.  I thought I hadn’t any tears left after the ride itself. Turns out I had more. I hope and pray that this Dash, and the money it raised, is the one to save him, and that he’ll be singing just as beautifully at his grandmother’s next significant birthday in 10 years’ time. 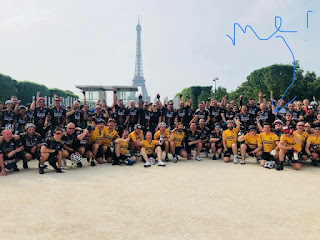 I’ve enjoyed writing this blog – I hope you’ve enjoyed reading it. I hope to be on the support crew for the Dash next year if they’ll have me – I am very, very happy to retire from long distance cycling. If you haven’t sponsored me, it’s not too late!

Being part of raising nearly 900-thousand pounds for Duchenne UK

Duchenne Muscular Dystrophy is the most common fatal genetic disease diagnosed in childhood. Children born with DMD cannot produce the protein dystrophin which is vital for muscle strength and function. Muscle weakness starts in early childhood. Many use a wheelchair by around the age of 12. As deterioration continues it leads to paralysis and early death, often in their 20s. It almost exclusively affects boys. There is no treatment or cure. In the UK there are around 2,500 boys affected and around 300, 000 worldwide. It is classified as a rare disease.

Duchenne UK is a lean, ambitious and highly focused charity with a clear vision: to fund and accelerate treatments and a cure for Duchenne muscular dystrophy. The charity has been formed by the coming together of Joining Jack and Duchenne Children's Trust, the two biggest funders of research in the UK in the last three years. Its president is HRH The Duchess of Cornwall. Its patrons include the broadcasters Krishnan Guru-Murthy and Mary Nightingale, and the sports stars Owen Farrell, Kris Radlinski and Andy Farrell.